I was meeting the electrician at a new job site yesterday, but I got their a little early. The lake was like glass and the colors were nice, though this isn’t going to be a great year for leaves. It was chilly, probably about 32 degrees and very quiet. I put my little camera in my pocket and took a little walk around.

I walked up on the rock in front of the cabin and was standing there when I caught something something out of the corner of my eye. It was a fox curled up looking at me over his bushy tail like I had disturbed him. He had the expression on his face that he was not quite ready to get up and face the chill of the morning yet.

I thought he would disappear quickly, like every fox I had ever seen in my life, but he just laid there looking at me, so I slowly reached for my camera. Then he got up and slowly walked over to me. Very strange. He stopped about ten feet away and sat down looking at me. He didn’t seem concerned, possibly more bored than anything. He didn’t look sick or anything, (like I would know if a fox is sick), just mildly interested in me. I tried to coax him a little closer, but he had no interest in that. I wonder if I had had some food, maybe he would come, but I had nothing. 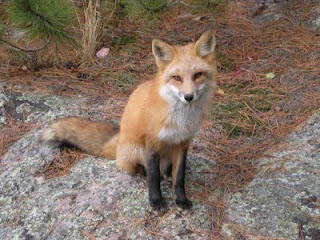 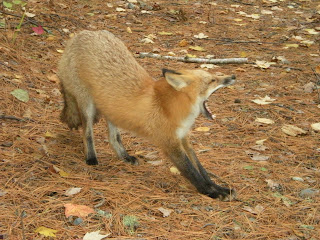 We spent about 15 minutes there together, I would guess. He walked around me looking at me, sitting there looking bored, yawning, scratching. I felt a little silly taking pictures of him, he had that cat like attitude that makes you feel like you are really an inferior being, but I didn’t really know what else to do. I said a few words to him, but he didn’t seem to hear or didn’t care if he did hear. I wondered if some of the cabin owners in the area fed him and he was waiting for something from me. 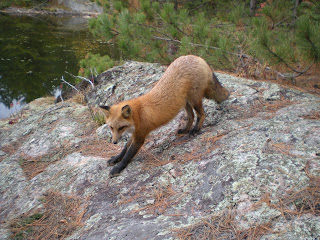 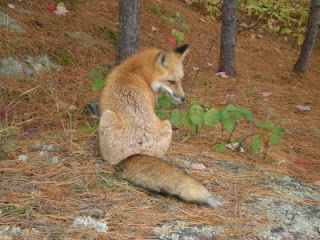 Eventually, he seemed to get tired of the whole thing and just wandered off slowly into the woods.
The electrician drove up and I told him about the experience. We talked briefly about the grouse we had seen on the road on the way in and the chilly morning and then the day moved along like any other. 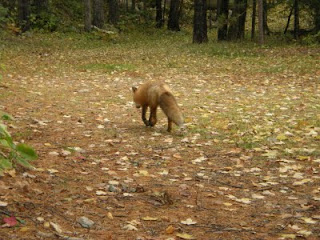