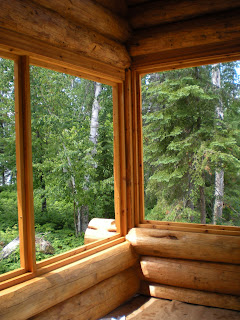 We are getting the staining of the outside of the building done now. The above photo shows the screen porch framed and ready for the screen, but we decided to do the staining at this point rather than try to cover the screens. 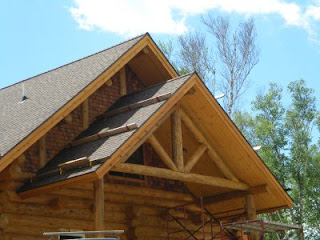 Someone sent me this the other day and asked what i think about it:

My response may not be the best thought out and organised, but I hurridly jotted down the following:

Well, first off, I’m not really all that “liberal”, I don’t think, though I took some sort of internet test recently to determine this accurately and I came out a little left of center. Anyway, the Fox news thing wasn’t that bad, till the end when she said you might just have to find a different lake to go to, there are, after all, over 10,000 of them. that’s funny.

This mining stuff has been in the works for some time. The testing is down around Birch lake near Babbitt, but that all does flow into the BWCA. The environmentalists are getting a little uptight about it, (I don’t really consider myself an environmentalist, most of them are more than a bit nutty), but really there is not a lot being said. I like the idea of some sort of industry that might create some jobs other than in the tourist industry, but I don’t know a lot about this mining procedure they are talking about. Seems to me though, that there are enough laws in place now, that they would have to come up with something pretty clean to make it happen. Maybe I am naive, in thinking large industry will have to conform to the laws set up by the EPA and folks like that, but I like to think, with the increased attention, they will have to do what needs to be done.

I guess I have taken a somewhat apathetic attitude towards all these things. It seems like thing will happen and there’s not a lot we can do except try to make difference in the small circles within our reach. I am more concerned about North Korea, but that is even farther beyond anything I can have an effect on.

On the mining thing, my opinion is, it will be a relatively small operation in the end. they are never going to tear up the land like the iron ore mines did. They will ultimately create a few badly needed jobs and, in the end, everything will be pretty much unchanged, except that the environmentalists and the Rusch Limbaugh types will have something else to argue about. I have other things to expend my energy on. those nuts will never find any common ground. They fight for the sake of fighting, just like the Republicans and Democrats. There is no end.

I wouldn’t worry about your real estate value dropping or anything like that.

This is one viable option for creating new jobs, and I can’t really think of any others…logging would be good, but the same thing, environmentalists and local people would have to come to some sort of an agreement, and that is just never going to happen.

Like many other similar towns, Ely seems to be dying. Locals who grew up on Burntside can no longer pay taxes and have to sell out to rich people from the cities. There are so many empty houses in town for sale. The only industry will be catering to the tourists, which is a 4 month out of the year deal. Not many can make it on that. All Mom and pop businesses, nothing bigger. Just scraping by.

I will stop there…